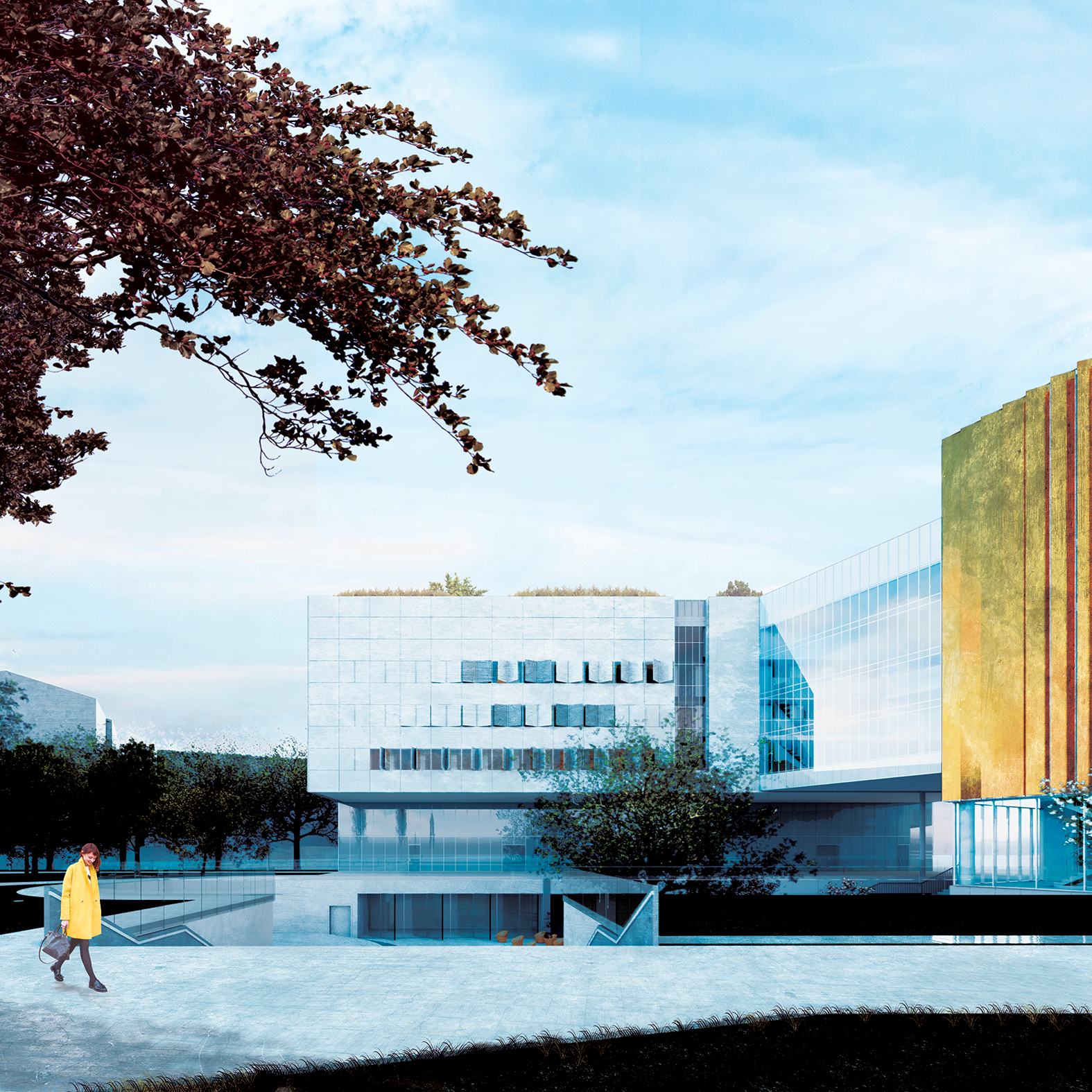 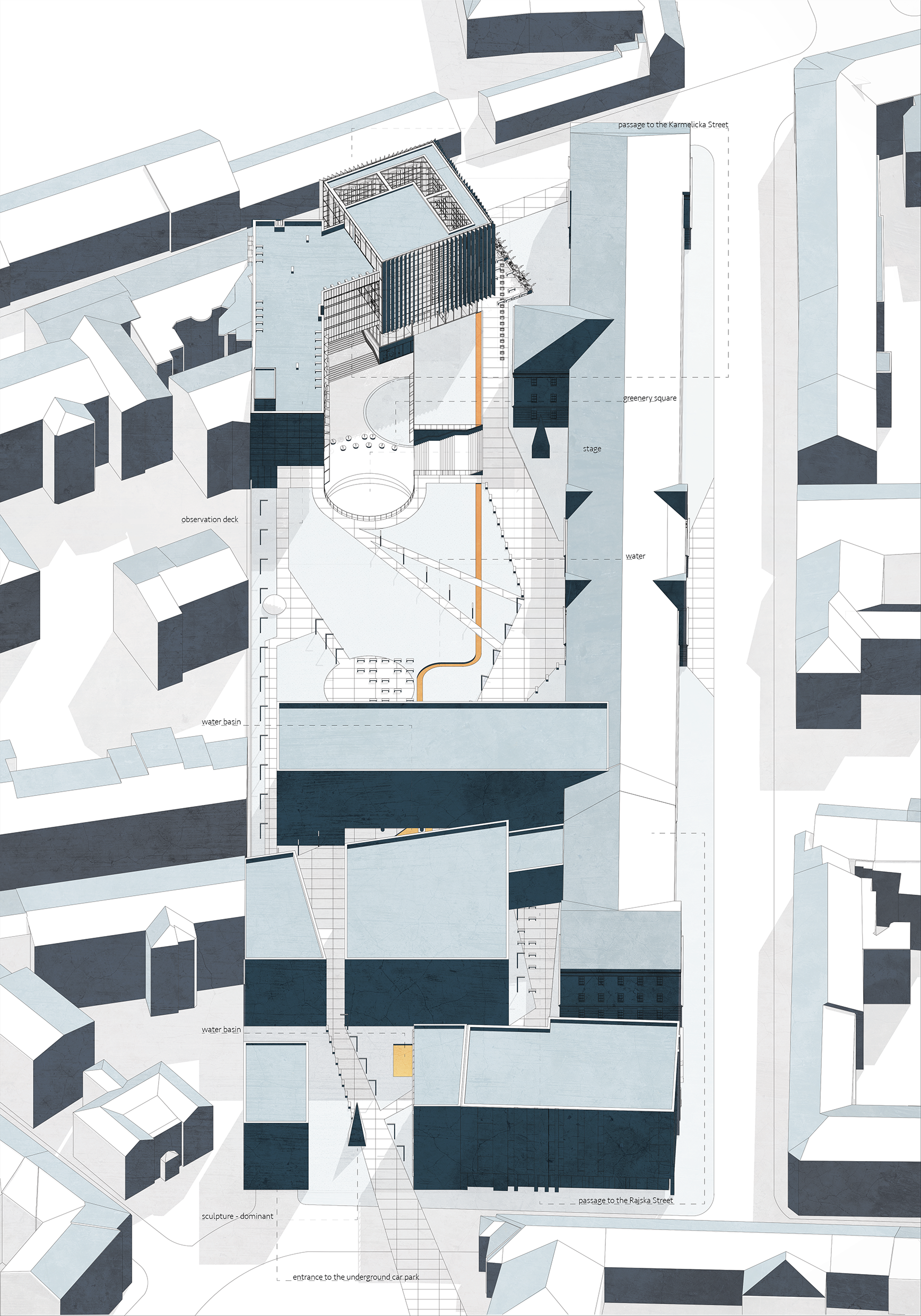 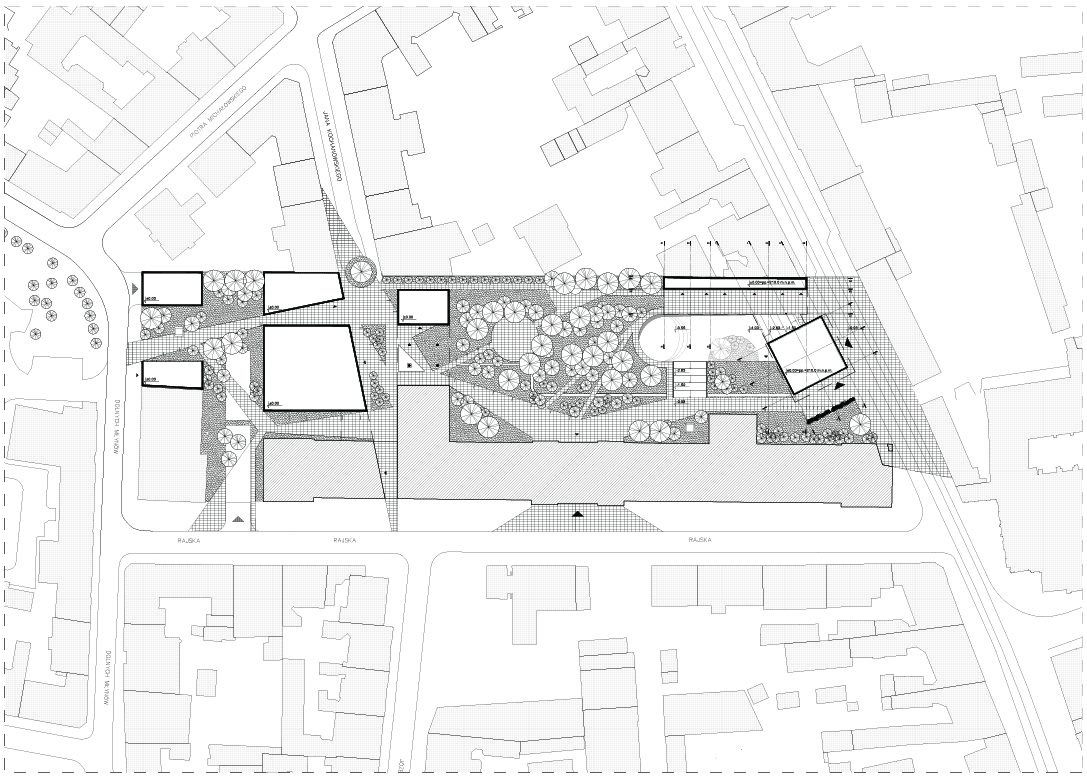 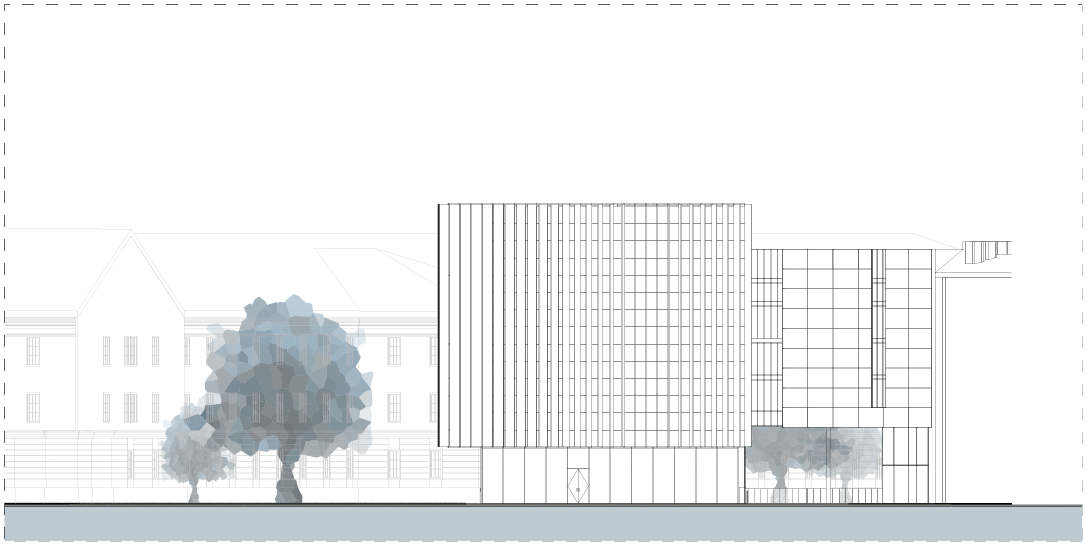 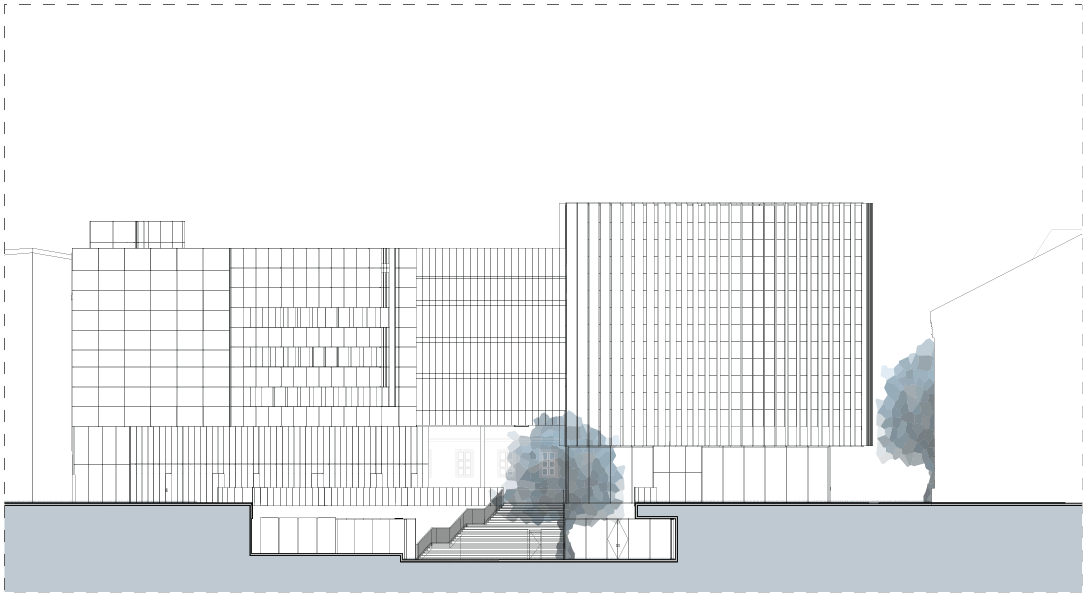 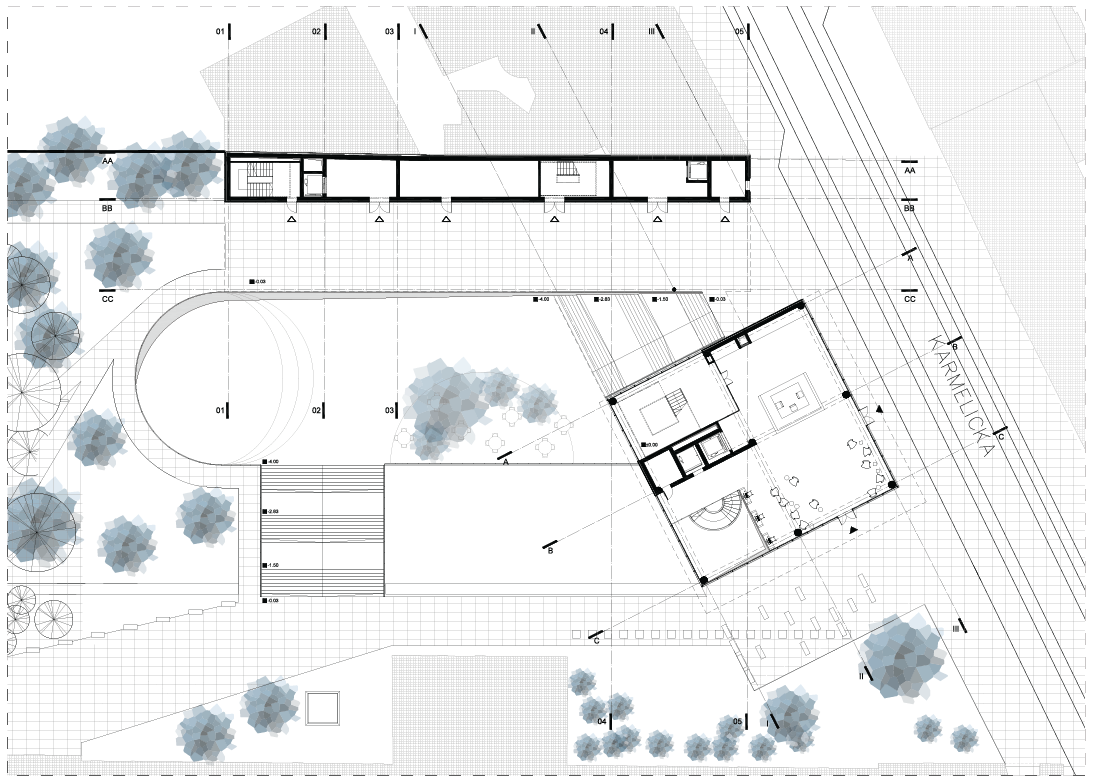 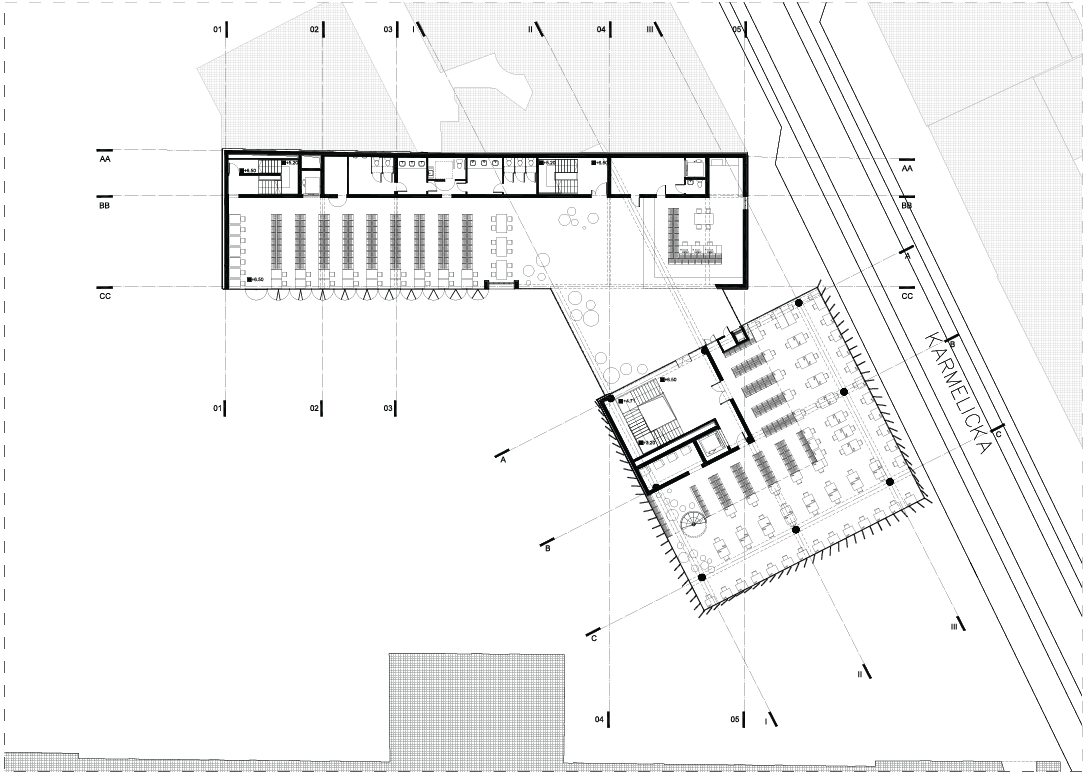 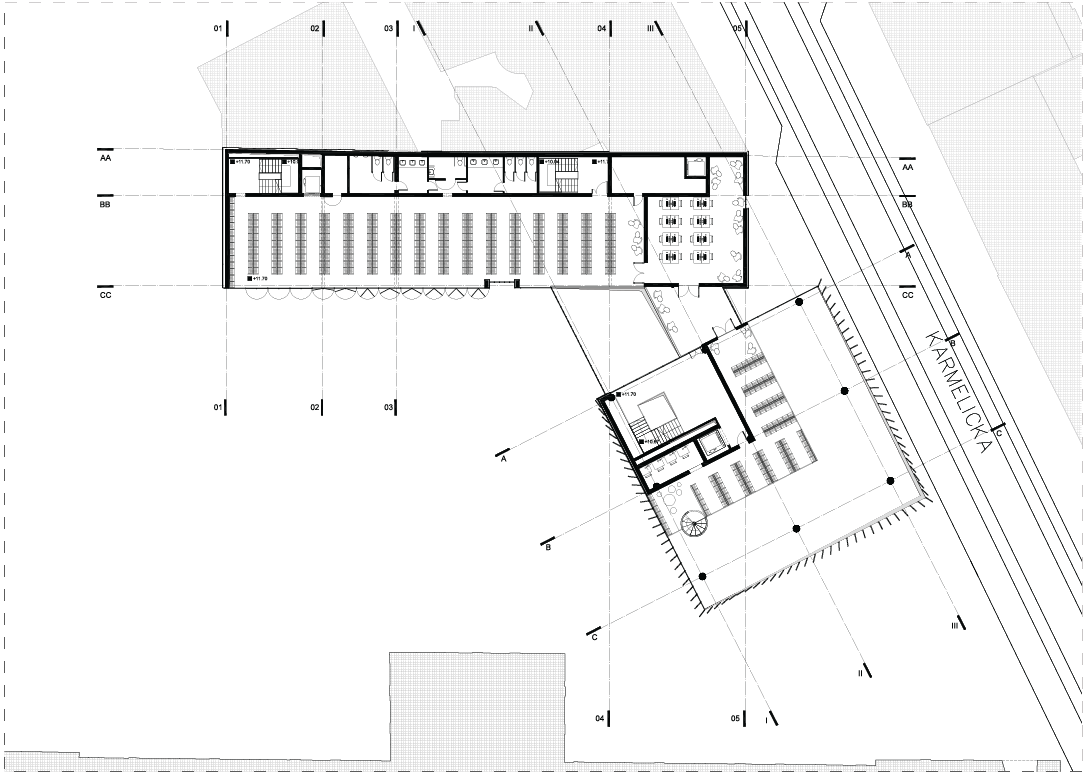 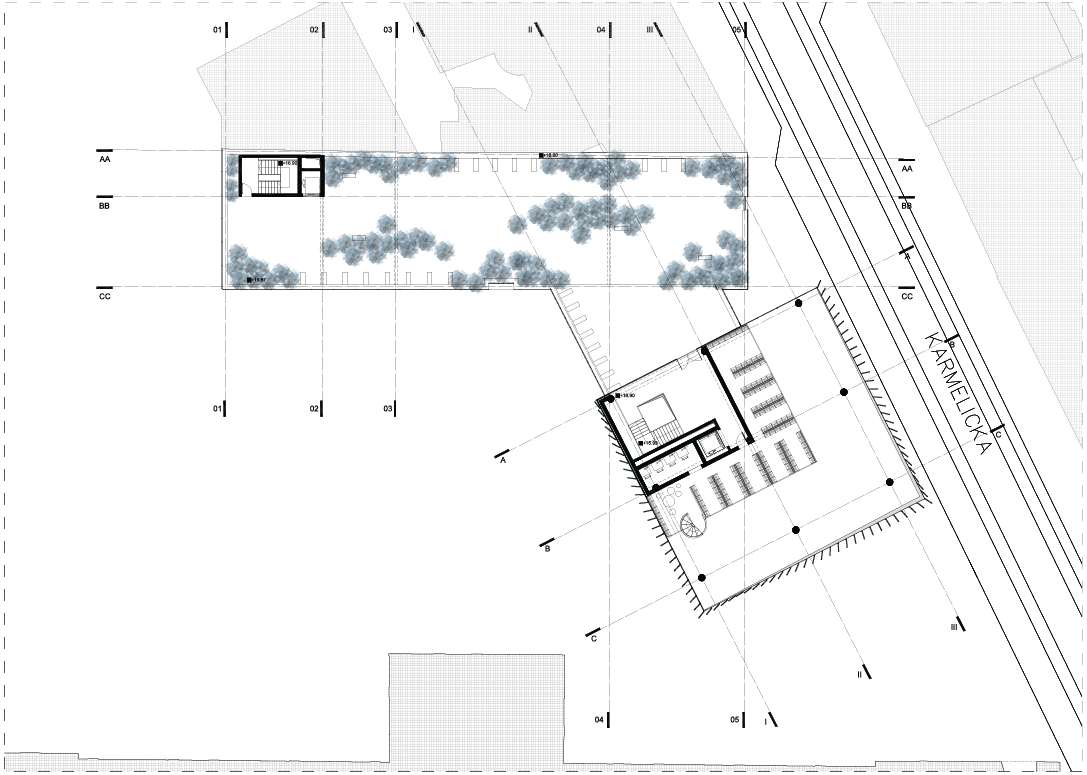 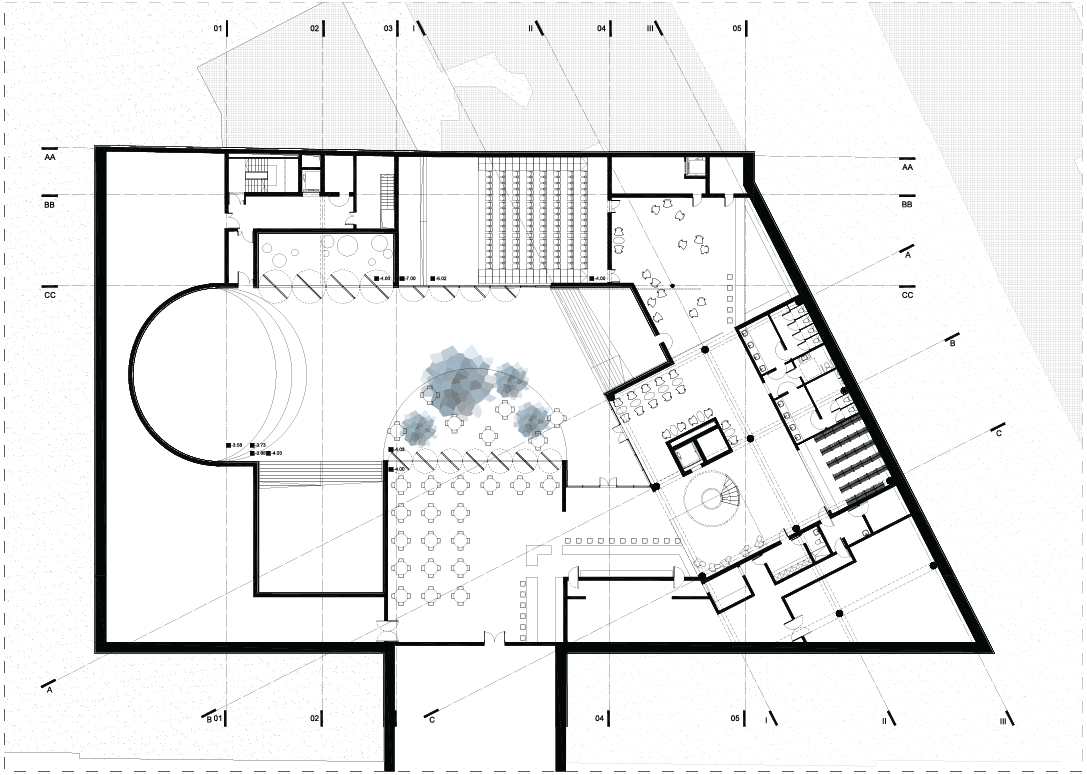 Save the City! Read some books | Masters thesis

In the year 2050 67 percent of world’s population will be living in cities. City sprawls and overflows on the outskirts. Desolate in the center. Inhabitants become addicted to cars. City forces them to struggle everyday in traffic jams. Long journey times,

Cracow suffocates. In 2016 188 days of the year the european air pollution norm was exceeded. The mandated daily norm is a maximum of 50 µg/m3. It can not be exceeded more often than 35 days per year. The green areas cover 9 percent of the city. Cracow lacks public spaces. Lacks trees. The city center is  dominated by tourists. Suburbs are for inhabitants.

A Book annually. Even less – that is the number of books read by the average polish citizen. In 2016 thirty seven out of one hundred subjects read one or more books in a year. Compared to the year 2015 the number of people using a library reduced by two percentage points (from 13% to 11%).

The Issue of Rajska street area

The issue contains three elements – city, Cracow and books. The issue looks inconspicuous viewed from the perspective of a passer-by. It is long, narrow. Chaotic. Only from  height can one feel its real scale. Hundreds of meters of length. The issue is a plot situated next to the Voivodina Public Library, that, like a wound in the city’s fabric, breaks it and divides it.

There is nothing on the plot. Except for parking places for 60 cars and three food trucks. The issue has been waiting for a solution for years.

The solution might be a step to cure the city. The solution for ventilation of the city – by designing a park. Saving the book by creating a place for it within the city and in citizens’ minds. Healing the city fabric by orderly organized and thoughtful urban decisions. Contribution to the improvement of inhabitants’ lives by creating a space for them, where they would be at the center of the design.

Save the city! Read some books – project

The building is a catalyst of activities. Open for the needs of city’s inhabitants. Available 24 hours. The area is designed to become a connecting space between, presently, separated parts of the city. It should become a green bridge between Karmelicka street, which now serves as a linear, transit street and Dolnych Młynów street. Connection between Rajska street and Michałowskiego street. The project proposes a creation of an open pedestrian passage by removing part of the Public Library facade. Project convention is to create a sense of a playful environment by forming new spatial spaces filled with greenery  that surprise the visitor with its variety. By introducing such a diversity of spatial variables, the complexity of spaces will encourage visitors to wander and discover the space. The park will be not only a simple passage between streets  but also an astonishing pathway through ever-changing architecture, full of secret passages and small yards that would invite one to explore them.

Save the city! Read some books – Cracow Garden of Culture Building.

The building is a catalyst – open for the always changing needs of the inhabitants. That is why it is open 24 hours a day inviting visitors to enter the park. The building would be promoting a link between culture, entertainment and the library. To create a clear message that those three things are indeed connected and worth visiting.